It’s been a while since I posted anything spinning-related but there’s definitely been progress on that front. One of my Ravelry haunts has a “Year of Silk” thread going on and I’d been actively avoiding it until I spent a few days cleaning and reorganizing the house and stumbled on the High Speed Kit I’d picked up at Village Spinning and Weaving last year. I’d bought it for spinning cotton but had already spun up quite a bit and didn’t want to change over mid-stream. So, it got put away. Until last week.

I thought it’d be a good idea to get comfortable with the flyer and bobbin before diving into a project, so I dug up the two small bits of silk leftover from a CNCH workshop I took two years ago (!), attached the new pulley to my Julia and dove in.

Wow. Just plain wow. Treadling was nearly effortless and the amount of twist just plowing it’s way into that silk was amazing! I was able to spin finely, and quickly! After a few hours, I ended up with this little beauty: 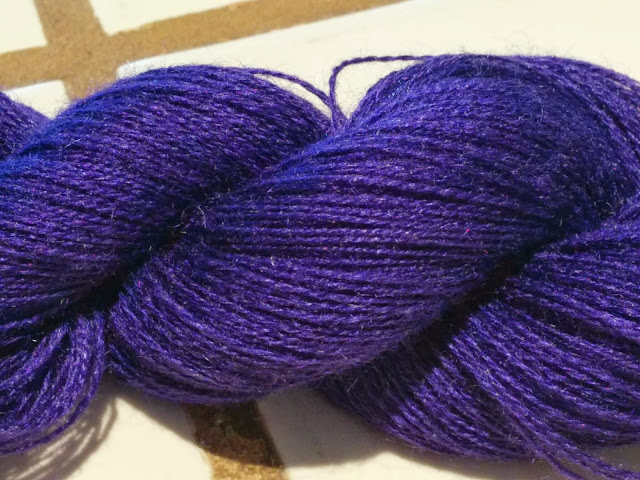 and I was hooked. Completely and totally hooked. Where had this thing BEEN all my life? That sent me marching into the storage area out in the studio to pull out the precious bits of silk I’d bought at Opulent Fibers, that same CNCH, specifically to be spun-up for weaving. Now that I had the flyer, 10oz of 20micron tussah didn’t seem like nearly the challenge it once was. Two afternoons later, I had this:

and I simply can’t stop. My grist isn’t consistent, but that’s ok – I’ve a new plan for this silk, still weaving but the layout of the warp will be different and it’ll be completely tolerant of that variance in grist. I’m going to aim for 2oz a week until these are done; and in the background I’ll do the math to see if this’ll be enough.

If not, I know where to get more.

This entry was posted in Spinning. Bookmark the permalink.