Last week was a busy week. I wove off nearly 2/3 of the warp that’s on the AVL and the cloth beam started to take on that pleasing plumpness that means progress is being made. The bouts in each of the sections were getting noticeably smaller and I had already gone through three colors of weft (at five towels each color, that’s no small number) and was branching off into the greens and blues. What a great feeling. 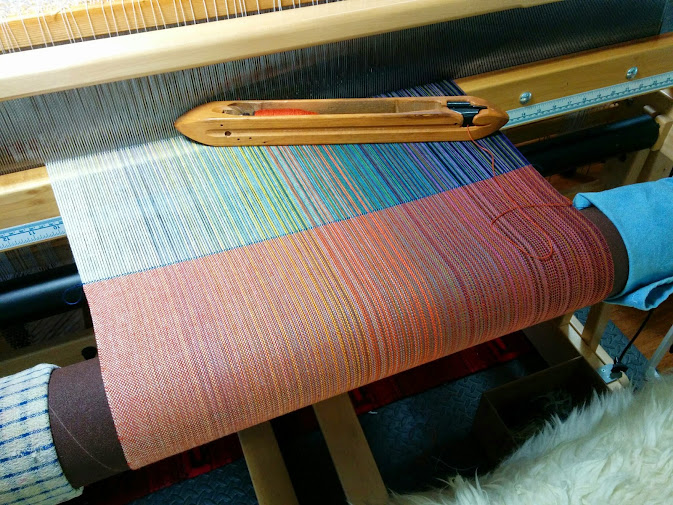 Then, yesterday, blammo. Catastrophic hard drive failure on my laptop. For my fellow Mac users, you know it’s bad when there’s nothing but a grey screen on boot (not even an Apple logo to kindle a bit of hope). The computer isn’t new – I bought it as a refurb three years ago – but I didn’t expect that it would all happen so suddenly. And the proof in *that* pudding is the fact that my last backup was on April 12th. Thank goodness it was this year, at least.

Enter the best husband IN THE WORLD and his posse of IT dudes. They gave me (and him) a few things to try and by this morning there was a glimmer of hope. Six hours, two external drives, a SD card and lots of effort later, I’ve got line-of-sight on a few key things that I did between now and that last backup and hopefully we’re performing open heart surgery tonight to put in a new hard drive. Then it’ll be restoring, copying and rebuilding as much of what’s likely gone as I can.

Since I left the tech world, I’ve embraced all the low-tech things that I love – fiber arts for sure, but also cooking, sewing, reading, and just being outside. That said, there’s a not-small part of what I do that makes heavy use of that laptop – writing, designing and keeping in touch with friends who are far away. So, when it all went to pieces yesterday, it was unexpectedly disruptive.

Anyway, now that things are (hopefully) on the way to being ok, I could get back to doing things that are more low-tech: 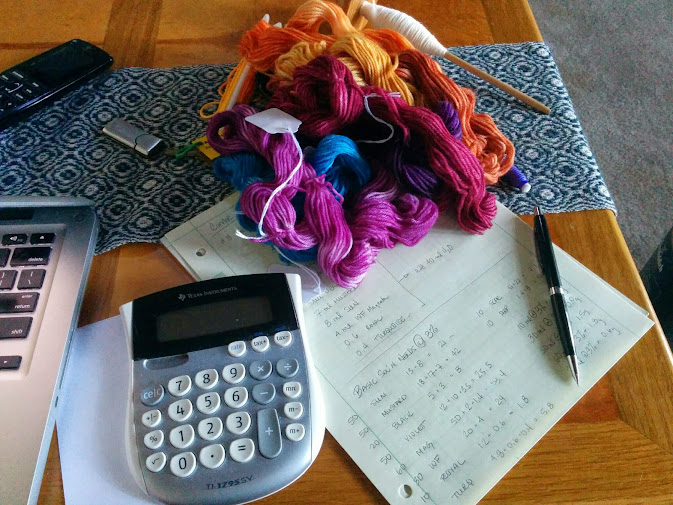 The warps are wound and ready to paint, colors checked using sample skeins and that trusty calculator was just the thing for working out dye formulas for each color.  And yes, that’s the guilty party just off to the left.  It’s on life-support but just functional enough for me to get this post out.  Oh, and the spindle is there because it’s once again July and time for the Tour de Fleece.  That’s my second spindle’s worth in process (Polwarth, undyed, in case you were wondering) of singles that are destined for weaving.  Another welcome distraction when the laptop is kaput.

So, wish me luck y’all.  Fortunately, the AVL has it’s very own computer and I’ve plenty of other looms to keep me company.  I can wait it out if need be.

This entry was posted in Dyeing, Spinning, Weaving. Bookmark the permalink.