I love origami.  It’s not something I do often, or that I’m good at, but the planning and ingenuity of being able to think through the folds is endlessly fascinating.  It’s a skill that I could stand to improve because it’d also improve my sewing ability.  There’s a lot of crossover between planning a turn of fabric to miter a corner and making the neck of a crane.  So you can imagine how intrigued I am by the Origami Shirt pattern that was originally published in the March/April 1995 issue of Handwoven.

It’s deceptively simple – a single piece of cloth, 1 x 6, that is cut, resewn and folded to make a bias-cut long sleeve top.  It’s a truly charming notion – one that’s been simmering in my head for quite some time.  I attempted to make a muslin about a year ago that failed miserably, mainly because I was (as usual) rushing my way through and I made an unrecoverable cutting error.    I also quickly realized that seam allowances hadn’t been added into the pattern and my skills just weren’t up to dealing with that.  Yet.  It got unceremoniously chucked into the bin and into the back corners of my brain.

Earlier this month, while getting ready to head back to Wisconsin for a vacation with friends, I decided it was time to tackle this project again.  But this time, I’m thinking it through. 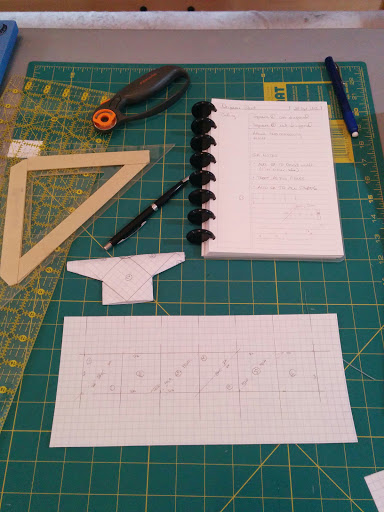 There’s a little paper mockup so that I can see how it all fits together, a few notes on laying out the pattern and now I’ve got a plan.  Just to be sure, I’m making a paper copy, first.  And, in the mean time, I’m sizing some yarn.  Because if you’re gonna make an origami top, you use handspun fabric.

This entry was posted in Sewing. Bookmark the permalink.