My arm continues to get better – thanks in no small part to the talents of the person in charge of my physical therapy.  She continues to give me new and, frankly, uncomfortable exercises each time I see her.  On the other hand, doing those exercises is what’s resulting in little wins every day.  Case in point – yesterday I opened a jar of jam.  It may not sound like much, but it’s more than I could do last week.

Weaving on the big loom is still pretty-much verboten (we won’t talk about what I did a few weeks ago) so I’ve started a project that can run at it’s own pace and that I’ve been meaning to do for a while – I’m working my way through a wonderful book on tablet weaving called Applesies and Fox Noses – Finnish Tabletwoven Bands by Maikki Karisto and Riika Sundqvist.  This charming little book has directions and pattern diagrams for 30 different bands, starting from very simple through rather intense.  The illustrations and directions and wonderfully clear and I’ll end up with a nice book of samples along with a stash of bands that can be used for a variety of things.

Tablet weaving is deceptively confounding.  There’s a rhythm and a pattern, but it’s not as easy to see because it’s not weaving in the traditional sense.  Rather, the threads that are manipulated by a single card are actually plying around each other as the cards are rotated – and the order and direction of plying is dependent on the order of threading, the direction of threading and the direction of rotation.  One of the reasons I wanted to work through this book is so that I could start to get a better handle on how it works rather than just blindly following the directions.  Interruptions while weaving are inevitable, so being able to see where I am in a pattern will make recovering from life’s little hiccups much easier. 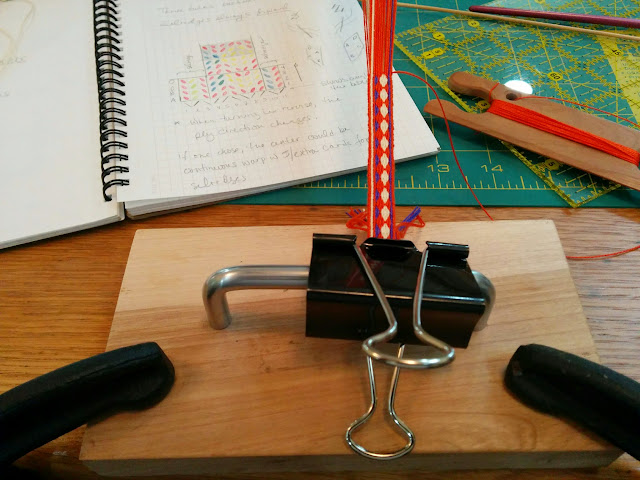 I’m using my own version of Gudrun Polak’s “Better Loom” – mine uses a threaded rod rather than a compressed spring over a dowel, but it works great.

And, now I’m working away on the second band – “Little Chicken Toes with Birds’ Eyes” 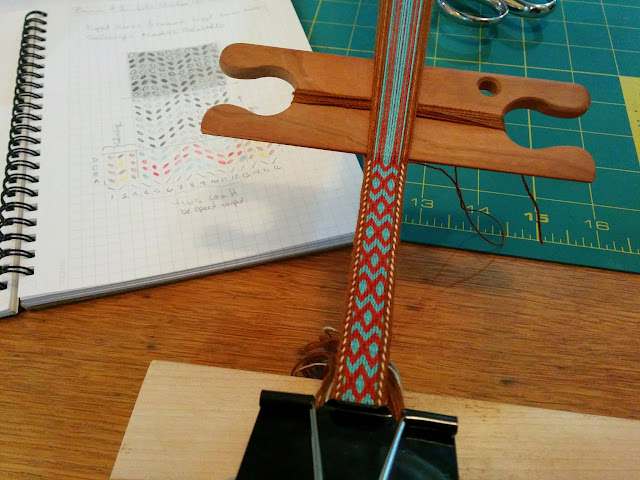 As is so often the case, this one is better than the first.  I’m not pulling so hard on the weft, so the selvedge is much neater and the diamonds are closer to being proper diamonds.  And, warping this one was much faster as well.  It’s not speedy by any means, but it’s definitely progress.   Can’t wait for the next one.

This entry was posted in Weaving. Bookmark the permalink.