I finished weaving off the hemp samples yesterday and the next step was pulling the shibori ties and then dyeing them in the indigo vat.  I had two small samples – one sett at 32epi and the other at 28epi (but you remember that from the last post!) and one large one.  Here are the two samples ready to be pulled: 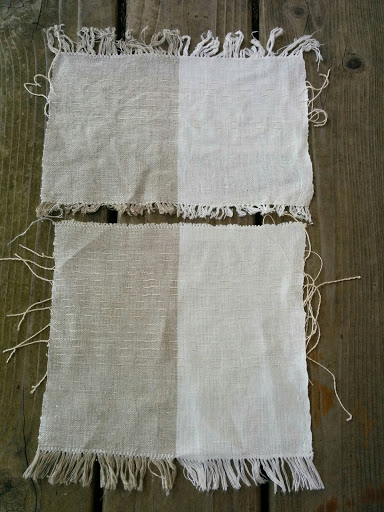 I gathered both of these and the large one.  Once gathered, the big one looked like this: 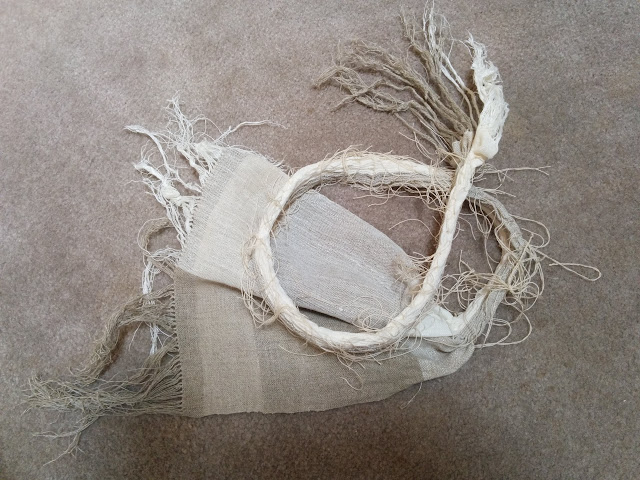 That lighter stripe at the end of the cloth is woven with a linen/silk thread I purchased a long time ago; remember, this whole thing is a sample and it was a chance to try a different weft.  In fact, I’m quite charmed by the way that little piece of fabric turned out and I’m pretty sure it’ll be making another appearance.  Once tied, all the pieces of fabric went into a big bowl of water to soak.

Next step was sharpening the vat.  I’d made the initial vat months ago and it’s been sitting, covered, in the workshop since then.  Reviving a vat is pretty straightforward – if I had a pH meter, it’d be even easier – it usually requires adding additional soda ash (to increase the pH) and some thiol to reduce the vat/drive out the oxygen.  I put the pot on a cooker and raised the temperature to ~90F, added the soda ash (after dissolving it in water) and then did the same with the thiol.  I let it react for about 30 minutes and then the liquid in the vat was that gorgeous green color and there was plenty of “mother” on top.  Time to dip!

First in were the two samples.  After a 20 minute soak in the vat, they looked like this: 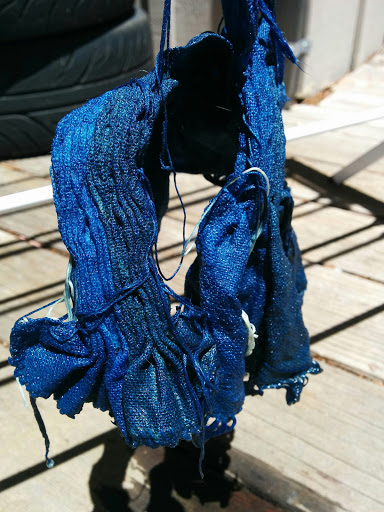 ah, that blue.  There’s nothing like it.  In went the large piece, for the same amount of time, and then I let everything dry.  In today’s heat, that didn’t take long.  If I’d wanted to, I could have dipped a second, third, even fourth time – but I was really happy with how that blue looked, so no additional dipping this time around.

Next step was opening the gathers and washing the fabric.  I use a seam-ripper to cut the gathers near the center of the cloth and then pull the ties free.  Then everything went into the sink and I gave it a good wash using hot water and dish soap.  After a scrub, the fabric was rinsed until the water ran clear and again hung up until almost dry.  Then, a quick press with a hot iron, and lookee here: 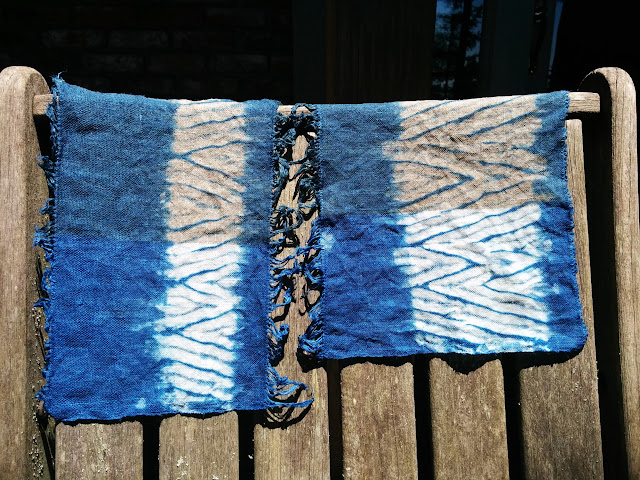 and here’s the big piece: 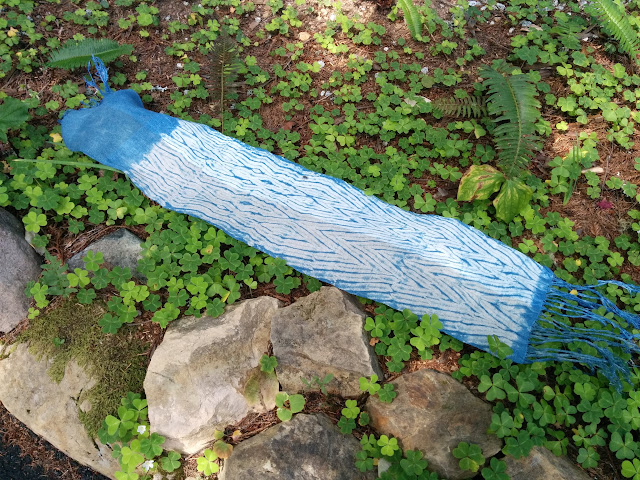 you can see where I started treadling more randomly – at about the half-way point where the big diamonds show up and then it gets much more organic.  Having a look at the treadling, as well as the spacing of the gathers were both on the list of things to try so this will be useful when I start the next round of fabric.  I think I’d like to see more blue and less white the next time so I need to have a look at the the threading and tie-up to see what I can do to expose more of the cloth to the dye.

So, all in all, a good round of sampling and practicing my indigo vat management skills.  A good way to spend a day.  I had a look at the vat and there’s a hint of green left in the water: 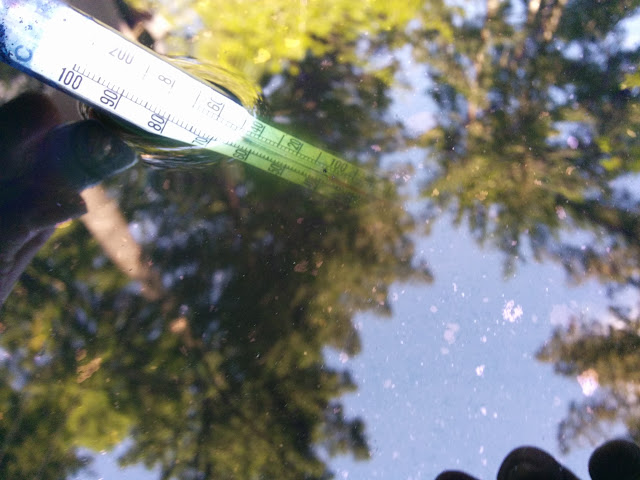 but I’m done for today.  I know I can wake it up another day.