When my copy of Traditional Stripes and Lattices arrived, it became bedtime-browsing for quite a few weeks.  It’s chock-full of inspiring photographs and one in particular caught my eye – Plate 37.  This, truly, is what made me fall in love with the underlying structure (M’s and O’s) and gave me a whole new way to think about it.  After looking and thinking and looking and thinking, I knew I needed to try and recreate it or it’d never let me alone.

The book gives no information about any of the fabrics beyond a photograph and fiber – everything shown is made from cotton.  Since my only goal was reproducing the pattern, I chose to work with a yarn that’s like an old friend – 8/2 unmercerized cotton.  I’ve woven literally hundreds of yards using this yarn.  I know how it finishes, how it moves and I also happen to have a rainbow of colors right at my fingertips.  This is most assuredly not the yarn used in the original textile – it would have been a single rather than plied yarn for starters – but that wasn’t what I was after.  I wanted to see the pattern, that was enough for a first experiment.

Step one was figuring out what colors to use.  Close inspection of the photo showed me that I needed two blues (original yarns were almost certainly indigo dyed – and multiple dips can give an array of shades of blue) and two golds/yellows.  I pulled out cones that looked likely and made a wrap. 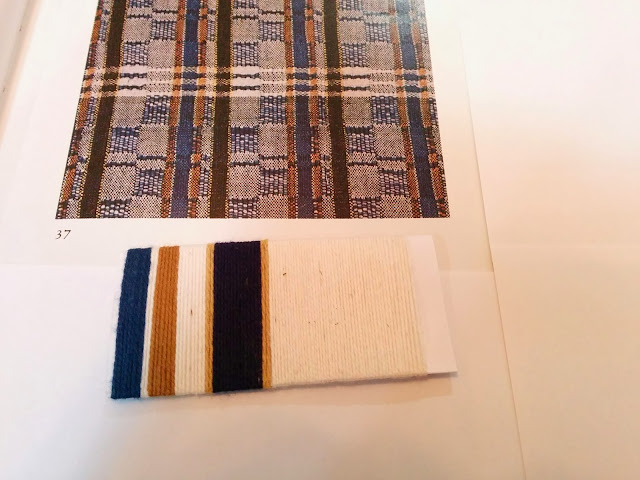 The darkest blue, in both the wrap and the pattern photo, looks black – but its actually a deep navy.  Winding the wrap gave me a sense of proportion for the warp and that big expanse of natural would become a light blue when woven off with the blue weft.  With that in mind, I started deconstructing the drawdown.

What makes this fabric so appealing to me is that it breaks the convention for this structure.  Close examination of the photo shows that the float length varies not only from block to block, but also *within* a block.  Two ends, four ends, even eight ends – all within a block.  And, even more wonderful is that blocks and floats aren’t the same within a stripe.  Here – this is what I mean (click to embiggen): 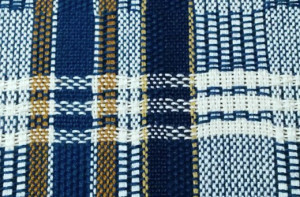 Have a look at the gold stripe about a third of the way from the left edge.  See how it’s split?  And see how the pattern block actually stretches to include the two white ends right next to it?  And it’s partner on the other side is the *other* block!  Now look at the wide dark blue stripe in the center – it’s also split, but this time down the middle into the two blocks.  Just wonderful.  Assymetrical symmetry.  Patterns within patterns.  And all those floats distort what is otherwise a very regular textile.  When taken in as a whole – it’s actually a plaid.  Every time I look at it, I see another thing to love.

The wrapping and subsequent weaving was January, 2014.  I put on a long, narrow warp with the idea of making a kimono or other Japanese-inspired piece of clothing and quite quickly wove it off.  Just about 10 yards (post sampling) which gave me about 9 1/2 yards after washing.  Unsurprisingly, the fabric was heavy and bulky – not something for a lightweight shirt, but quite well-suited to a jacket.  Since I couldn’t immediately figure out what to do with the fabric, and the structure was really inspiring me to keep going, I set it aside while weaving off a number of other pieces.  I knew that a little aging wouldn’t be a bad thing.

Fast-forward to March of this year (2015) and another impending deadline for my garment study-group.  I had a wool singles fabric on the loom that was nearly finished, but knew that I wasn’t ready to cut and sew that up without making a few muslins, so good old Number 37 came off the shelf.  And, along with it, came the “Padded Jacket” pattern from Folkwear’s Japanese Field Clothing collection.  I modified the pattern to use the sleeves from the Hippari and make use of the full-width of the fabric.  I also had an Indian plaid cotton that would work wonderfully for the lining.  Over the course of an afternoon  I managed to get everything cut and then I broke my arm.

Fortunately, all came out as well as possible and I was back to sewing within two weeks.  After a full day of work, I managed most of the assembly: 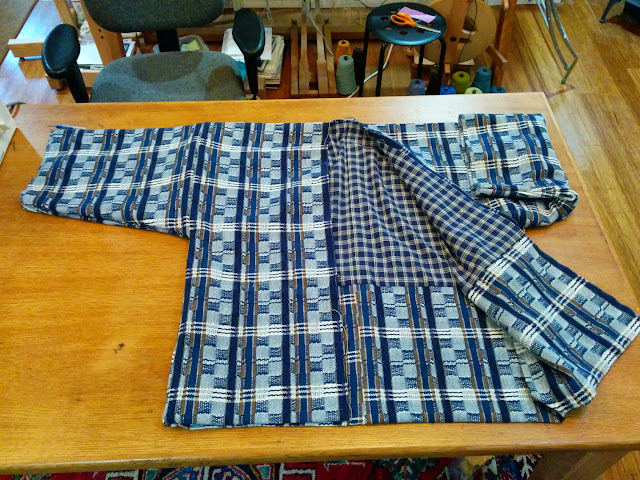 All that’s left at this point is cuffs and the neckband.  Getting to this point proved to be a bit harder than expected – changing out the sleeves meant rethinking the assembly steps and I made an error in cutting out the lining.  Rather than upsizing the lining so that the pieces matched my too-wide handwoven fabric, I cut it true to pattern and that made dealing with the lining a bit dicey.  But, nothing that couldn’t be dealt with.

Now it’s done – and I couldn’t be happier.

I think the scale of the pattern works well for a jacket; a smaller repeat might become too busy – or it’d work well as an accent rather than for an all-over garment.  In true Japanese style, I made no effort at pattern-matching the center back seam:

and the sleeves are just serendipity.  I like the way the stripes build up at the side seam though that’s mostly hidden.  And, even though the original called for a layer of batting between the outer fabric and the lining, I elected to leave it out because the outer fabric was bulky enough.  Good call.

I also moved the tie from the center of the neck opening to the side as well as lowered it so that it’s close to the waist rather than under the bust.  The length is nearly perfect.  When I make another, I would consider adding an inch or two.

I learned a ton making this piece.  From fabric all the way through the construction of the garment, the entire process kept giving me new ideas as well as opportunities to improve my skills.  I know I’ll wear this for a very long time.  Not only because I love it, but because it’s made to last.  And I’m not over you yet, Number 37.  Now we’re best friends.

This entry was posted in Books and Reading, Sewing, Weaving. Bookmark the permalink.